Yours is a very bad DSL company

The next morning I went down to the gym at Wynn to work out and found the perfect blonde from Toronto dutifully toning every muscle in her youthful body with ostensible husband David standing nearby in workout gear. “Nice supervising,” I told him. I guess you don’t let that one out of your sight for a minute.

This time of year plans never work. With airports and highways filled with amateur travelers, vacationing employees replaced by inexperienced substitutes, and hostile weather over most of the northern hemisphere, it’s no surprise when even the most ossified traveler cracks. I finished up the shopping the next morning and then headed to the airport. Headwinds made the flight a half-hour late and my seat opponent was a large infrequent traveler who wanted to chat me up to mitigate his fear of flying.

On the parking shuttle in Seattle, a doddering old man took my bag when he got off. When I discovered the only remaining bags weren’t mine, the driver radioed the gate to ask everyone to double-check their luggage. I drove up in the rain behind a line of three cars being held up. The doddering old guy got out, opened his trunk, looked at a corner of my bag, said, “Yup, it’s mine,” and closed his trunk. I stood in the rain and, gritting my teeth and smiling, restraining my strangling hands a la Dr. Strangelove, asked him to check again. He reopened the trunk, looked at the same corner of my bag, and said, “That’s mine.” I reached in and lifted my luggage tag into view, then wordlessly removed the bag from his trunk, walked back through the rain to my trunk, and loaded the bag.

When I got home, Verizon had turned off my Internet, leaving only a browser screen saying to call them. I called them but they were closed from 6 p.m. to 8 a.m. so I watched a couple episodes of West Wing season seven and finally got to sleep. When I woke I saw it was just after eight. I immediately called Verizon and spoke to six different individuals, none of whom could explain why my service was cut off, but all of whom were very clear it would take up to 48 hours to restore. I asked to speak to the vice president of customer service, but apparently they don’t have one, so I settled for a one-month credit, although I had no confidence this same screw-up wouldn’t happen again next month.

The service actually resumed in only a little over an hour. I got a little work done and then the lights flickered in the strong winds. Now my Internet was down again. Steve was on his way over to meet me for dinner but I called Verizon tech support and got someone in India who, after making me do a list of ridiculous things, decided my modem was fried. She said I would have to call Verizon sales to get another one. “And let me guess…they’re not open?” “Oh my goodness no. It is well after 6:30!” 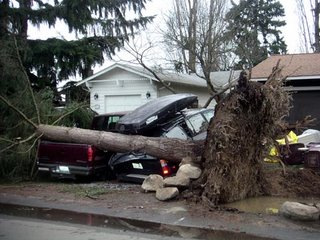 Fortunately I realized I could just drive to the CompUSA a mile a way and pick up a new DSL modem, so Steve and I drove over there, got one, left it in the house, and headed to Yarrow Bay Grill for a nice meal. Just as we were leaving the parking garage after dinner, the lights flickered and went out. “Ha! We sure timed that one right!” I said, not realizing that the flicker was the result of Puget Sound Energy throwing the switch on 700,000 homes, including both of ours, due to widespread wind damage

I spent the night in the dark but by morning the thermometer had dropped to near freezing and the power showed no signs of going back on. I booked a room in downtown Seattle and called a local uberbabe to join me downtown for dinner. In the hotel room I fired up OpenTable and saw a name I hadn’t seen before, Qube. It was close to the hotel so I booked a table. It turned out to be the first night they were open! We shared two of the four tasting menus, the surf and the turf. The surf was absolutely fabulous, beginning with salmon prepared three ways and moving on to prawns three ways (hence the “qube”). The turf was good as well, especially the game duck. They had my favorite sake, Divine Droplets, making the meal a complete score. When you lose power – make PowerAde!

It looked like power might be out for days. Fortunately, tomorrow I was flying to Vegas.
Posted by Richard Brodie at 9:17 AM

You didn't happen to meet my friend Jan at Qube did you?