The Adventures of Captain Penis

Ah, Las Vegas. There were still 400,000 homes without power in greater Seattle but Las Vegas Boulevard had all the neon lights anyone could wish for. I checked into Caesars Palace, spelled with no apostrophe despite the typo on the new street sign on Flamingo, and caught up on world affairs. Iggy posted a link to the longest thread in the history of the Two-Plus-Two poker discussion board, posted by ex-stripper Brandi Hawbaker, a recent debutante on the tournament circuit. Brandi accuses “Captain” Tom Franklin of offering to mentor her in poker, conning her out of $12,000 and: 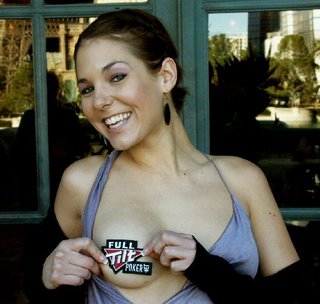 The next night, he crawled into bed with me naked. His penis on my back, frighten me, and woke me in the middle of the night. I freaked out and spent the rest of the night in the bathroom. I crawled to sleep on the floor and used the towels as blankets. I was traumatized…Every day he started having talks with me at breakfast/lunch.. how he was doing so much for me and that I needed to do something for him. He said at that time that I could not have my money back and that I had to "huggle" with him…When I got to Foxwoods, everything had changed. He had a young 22 year old girl with him, named Amanda. We were all supposed to meet at the airport but his flight was delayed, so we shared a cab. My friend was still with me at the time, and she confronted Amanda. Amanda came out and said that she met him two years ago when she was with her mom and that for two years Tom has promised her a job in his company ~ which was still yet to happen, as Tom does not have a company. She talked about how he makes her skin crawl and that she has turned into an alcoholic and that she dropped out of school and is now taking care of her mom and dad with the little money that Tom is giving her to have sex with him.

You can’t make this stuff up. I hope everyone now sees why I always ask girls if they are strippers first, before it escalates to the huggle.

I played in the Ultimate Poker Challenge $340 event on Sunday, going busto 25th of 95 starters when my Jacks couldn’t hold up against Ace-Jack. Before I busted I witnessed one of the worst plays I’d ever seen. With several limpers, a good player raised in the big blind and got two callers. The flop came King-Nine-Eight rainbow. The good player, with about 10,000 left, bet 2300, about the size of the pot and 25 less than the third player to act had in front of him. The second player, who had about 15,000, called, as did the short stack. The turn was a blank. It checked to the short stack, who put in his last quarter and both called. The river was a Queen. The good player thought a bit and then checked. The second player moved in and the first player folded. The second player showed Seven-Six. The all-in player showed Ten-Seven and won the pot with Ten high. If you’re not sure why that was the worst play ever, you should probably give up poker and try gardening.

A prior UPC event was the last time I chose to engage Captain Tom in conversation. He had tried to skip his big blind by claiming the button hadn’t been moved before the break and, when caught, accused me of being a cheater. So Brandi’s story is far from the first attack on the character of Captain Tom.

Now let us turn to Brandi. An innocent babe taken in by wolves? Probably not. Online pro Mark “Newhizzle” Newhouse posted a long story of his own involving Brandi and how she blew about $30k in one of his online accounts:

the next day when i got up, i tried to get onto stars, and my password was changed, i asked her wtf is going on, and she said she wanted it to be a surprise how much she was up, i was basically like, [censored] that, get me on my account, and she told me she busted it, i obviously got pissed, but she has a way of making me feel so bad for her that i couldnt stay mad for that long(yes, im a [censored] idiot) she called a few people to try to get money back for me, but she couldnt get anything, she told me straight up to keep quiet while she was on the phone with them because the only way that she could get money from guys is if they think that she wants to [censored] them, that pretty much changed my perspective of her, now i realzed that she was a scandalous bitch anyway, she got all depressed and locked herself in the bathroom that nigth, and i heard a glass break while she was in there(she has cuts on her arms from cutting herself, she gets extreamly depressed) i got really worried about her and knocked on the door and asked if everything was ok and if i could come in, she said she was taking a bath and to leave her alone, i shouldnt be listening outside the door, i was in a complete frenzy hoping that she wasnt going to kill herself and my friend called me and told me that mr. foo(90% VPIP full ring and quite possibly the best poker player ever, he was up easily 200k in like 3 days of destroying all the pros) was downstairs, so i went to go play poker and get the [censored] away from the room when i got back up, she was passed out in the bath, using towels as blankets and on the bathroom wall, written in blood, it said, "i will fly one day" so now im freaking out and i wake her up, she had made a pretty deep cut in her leg

But wait! Here’s the best part:

No, you can’t make this stuff up. Just more role modeling from the only sport you can play while drinking beer.
Posted by Richard Brodie at 1:27 PM

You can also drink beer while bowling! Unless you don't consider bowling a sport.

Obviously you are not a bowler.

Hey QL, long time no see. Hope you have a merry christmas. Enjoy a few reds for me.

Are you saying betting 7-high into a dry side pot isn't a good idea?