I flew down to Vegas for the annual poker blogger’s convention. My seat opponent, an engineer, noticed me tapping away on my Toshiba, glanced at the full overhead bin, and said, “Looks like we have dueling laptop scenarios.” He asked me if they were going to let me keep my laptop on top of my lap during takeoff and I said I didn’t think so. Apparently he was concerned about the distance he would have to travel once they announced device turn-off to safely pack away his computer in his luggage and decided to read a book instead. Meanwhile, the captain got on the PA and implored us to set aside reading materials and listed to the safety briefing which, in his words, “is primarily for your safety. 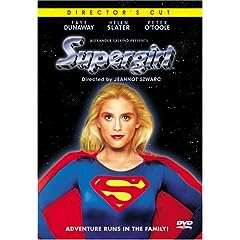 I tried to think about what the secondary purpose of the briefing might be but was distracted by the presence of two of the most uberhot flight attendants I had seen in a long time, Kara and Michelle, both short blondes. When Kara came to take drink orders I exclaimed, “You’re named after Supergirl!” Now I usually refrain from making jopkes about people’s names because they’ve heard them all before but she was completely oblivious to the fact that the one girl lucky enough to be rescued from the impending doom of the domed city of Argo, itself cast away whole when the planet Krypton exploded, was named Kara. She did say, “But I am Supergirl,” and smiled until the corners of her cute little mouth threatened to puncture the fuselage.

Meanwhile I heard a voice behind me say, “He flopped a flush.” I kneeled on my seat, peered over the back, and saw a nice Jewish guy around 30 with a stunning brunette with a dress that let you see all the way to Cleveland. I chatted him up about poker and when he said he was just starting out I invited him to come play mixed games with the bloggers at the MGM Friday night. On the way out I wished good luck in Vegas to him and his daughter. I make that lame jopke a lot but this time I got a really good reaction out of her. I think they must have been from some place like Pocatello, Idaho, and never run into a smartass before.

I signed up for this web site that pays me to write reviews of other web sites. It’s a marketplace, actually, and they simply list my blog along with its readership ratings and cost to the advertiser. The advertiser purchases the prospective review, I write 200 words and post it, and oh, baby, the money flows in. So here’s my first paid review:

[Advertisement] With the poker boom in full swing, some people want to turn that spare room into a den of poker iniquity. Although to most folks such a home improvement would be risible, we’re not like everyone else – we’re poker players! We need poker fast, we need it now, and we need it in our homes. Well, good news! The people at Cardroom Supply have an enormous selection of poker furniture in stock for immediate shipment. My favorite is the 54” Cherry Leather Round Poker Table with Four Chairs for a low, low price of $2799. This is less than one big blind in the big game at Bellagio, so do yourself a favor and surf on over there right now and buy everything they have. Want to hold poker tournaments in your own home, where the cops aren’t likely to bust you? Check out their full supply of chips, buttons, and timers. And why not expand into a full underground casino with their craps, roulette and blackjack tables? They even carry drop boxes so your cash can be carried right to the skim room without employee pilfering. So what are you waiting for? Imagine yourself in sartorial splendor, running your own burn joint. Listen to my dictum: surf on over to Cardroom Supply today.

I’ll leave you with a link to the famous radio interview with Jamie Gold after he won the main event. I finally got around to listening to it. Apparently he’s a natural-born tournament player, possibly the best of all time. Yum yum.

Posted by Richard Brodie at 9:28 AM

Did you blow through all your Microsoft money already? What you doing ReviewMe Ads for? heh. See you tonight I hope.. I will be the grey, short, chubby, Microsoft Loving Engineer guy getting polluted by Al.