Everybody’s been after me to write a review of the new Playboy Club at the Palms so I’ll do that a bit later in this uber-ish post. First I have to report that the ebonizzle angel who sat with me at the N9ne bar yesterday actually gave me a real Myspace page and a real email addy. She promised to accept me as a friend next time she logged in so those of you who see my life as some kind of irresistible train wreck can browse though my 200+ Myspace friends and try to figure out who she is. 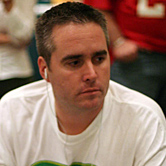 I had been in Vegas two days longer than my original plans called for. The forecast in Seattle was rainy and warmer so I planned to return tomorrow per my revised itinerary. Meanwhile I took advantage of the extra days in Vegas to hang out with one of my favorite people in the poker world, Chad Layne. I wanted to treat him to one of the great restaurants at the Palms but he insisted on taking me to Hank’s at the Green Valley Ranch. Hank’s is a virtual clone of T Bone’s at Red Rock so I was hoping they still had my favorite side dish, pureed cauliflower and horseradish. They did, and Chad and I shared a chateaubriand plus the creamed corn and grilled tomatoes. Chad and I usually do Grey Goose rather than wine but I snuck a glass of the 2002 B.R. Cohn Cabernet with the steak.

Apparently my having written about eating for the last 10 or so years qualifies me as some kind of expert. Real writers are calling me for quotes on fine dining in Vegas. When I started coming here 25 years ago it was all about $1.99 prime rib and all-you-can-eat buffets. Every hotel had the steakhouse, the Italian restaurant, and the Chinese restaurant. The emphasis was on cheap, not gourmet. Today you can hardly find a celebrity chef who doesn't have a place in a Strip resort. In the middle of the desert, the freshest exotic seafood in the world is trucked and flown in daily. The tip for two at Guy Savoy is more than most families of four spend on dinner. It's a paradise for the gourmet and the expense-account owner, but the day of the bargain is gone.

After dinner I played a little online with some of the many uber-hot pokerbabes who comprise my fan club on Full Tilt.

They all use the two hottest avatars, the one that looks like Shana Hiatt and the one that looks like David Grey’s wife Taylor. Railbirds, who used to ask who I was, have now seen me on TV more than they care to, so now they ask who are these people I’m playing with. “Uber-hot pokerbabes,” I answered. “What’s that mean?” one of the babes asked. 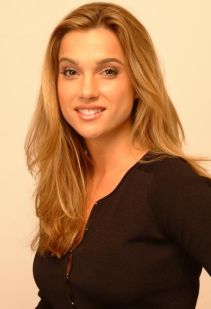 “Uber,” I said. It’s blogger for “very.” A fellow player corrected me: “It’s actually German for ‘super.’” Yeah, if you want to get all technical and shiznit. Babe und Überbabe! While all this idle badinage was going on, uberbabe karenr was beating me out of every pot in a heads-up HORSE, sending me on uber-tilt. I might have blown my whole bankroll $20 at a time but thankfully I couldn’t do a rematch because Jim had arrived to take me up to the Playboy Club high atop the Palms’ new Fantasy Tower.

The Playboy Club, at first glance, is a casino. It is, in fact, the first casino with a cover charge in the history of Nevada. The floor is filled with blackjack tables with booths and bars around the outside, all framed by picture windows framing the spectacular view of Las Vegas. Jim was a member, meaning we could sit at a table without getting uber-expensive bottle service, so we did and ordered drinks as he whipped out a pair of cigars with labels I didn’t recognize. “Pre-Castro Cubans,” he said. Wow. 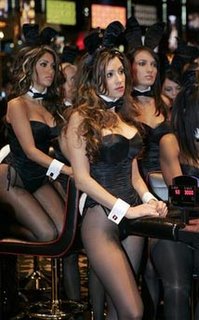 I thought it was pretty cool of him to share these ubercigars with someone he had just met. “How much money are you planning to ask me to lend you?” I asked. Fortunately he got my sense of humor and we had a great time talking about all things Vegas, poker, and online. Service at the table was superb: our server came by frequently to check on our drinks and a hautboy policed the ashtrays and empties, even stopping to replace the box of matches I had taken from across the table.

The one thing you think of when you hear Playboy Club, of course, is the bunny, and oh, there were bunnies galore. Our server sported black ears and a little white cottontail (they are now sewn on rather than velcroed – apparently people were grabbing them and selling them on eBay) and in fact even the blackjack dealers were bunnies. They were all nice looking but frankly the Palms had already done a spectacular job of hiring beautiful girls to serve drinks and none of these bunnies had anything on the earless bartenders downstairs at the Mint, who all had an attractive air of professional competence in addition to their pulchritude. Still, bunnies are bunnies and the experience was more than pleasant even though I neither asked for nor received Myspace addresses.

I insisted on paying for the drinks, given the magnitude of his tobacco magnanimity, and left Jim there to hold court with his next wave of friends. On the way down the elevator there was a guy wearing some kind of caveman outfit with an enormous bejeweled watch and a silver pendant with a script “A.” A girl asked him if the watch was a Breitling. “Yes, it is,” He said casually. “You’re somebody, aren’t you?” she asked. “Who are you?” “Bob,” he said. “Bob? What’s the ‘A’ stand for then?” “Uh…Andy. Bob Andy.” Now Bob Andy could be the world’s biggest TV star and I wouldn’t know it but maybe one of you can recognize the star sighting from my description. And speaking of seeing stars, if there’s anyone left on the Internet who hasn’t seen the photos of Britney Spears getting out of a sports car with no panties: do yourself a favor and don’t look.
Posted by Richard Brodie at 10:54 AM