No, I’m not dating Martha Stewart 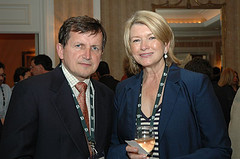 Apparently Martha Stewart was on the Howard Stern show and revealed she was dating an ex-Microsoft executive who invented Word and Excel. That would be my former boss and mentor, Charles Simonyi. I have no problem calling Charles the inventor of Microsoft Word – all I did was write the code. Charles had the brilliance to hire me.

I have never met Martha.
Posted by Richard Brodie at 12:33 PM

First outer space and now this? He seems to like things that are cold, dark, and dry.

This comment isn't directly related, but I have become fascinated by what ex-Microsoft people create in the after-life. Here is a link to a video about it from the Microsoft Alumni Network's After The Holiday Party: