The bloggers have descended on Las Vegas and despite my busy schedule this weekend I dropped by to lunch with 20 or so of my colleagues at the fabulous Wynn buffet. I snagged a seat next to uberbabe Amy Calistri and soaked in the atmosphere of pure brainpower mixed with alcohol fumes so characteristic of a blogger gathering. Michael Craig and I had dinner with Joanne Lutynec at Okada so she could win her bet, then with Carmen at Country Club the next night so that – well, basically just because she’s hot. 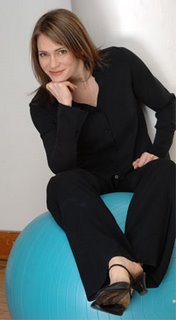 Yesterday was supposed to be the first day of the smoking ban in Nevada and although a judge delayed enforcement by a couple weeks most of the restaurants have already complied. Dinner in the front room at Country Club was a delight now that there was no smoke drifting over from the bar. Surprisingly, hallways in the convention centers both at Wynn and Rio still had ashtrays all over but I’m sure that will change.

Today I went over to the Rio and spoke at Jeffrey Gitomer’s success weekend. Jeffrey knows some of the best people, including my old friend Kevin Hogan, who I actually introduced to Jeffrey. Jeffrey is my hero because he always surrounds himself with uberbabes who are not only beautiful but also smart and competent. One of the guest speakers he had lined up was Victoria Labalme, a quick-witted speaker with the looks of a model who uses theatrical performance to make her points. I found her very interesting.

All the bloggers are whoring themselves out for paid reviews now so I’m keeping one step ahead of them with this:

[Advertisement] Two of the hottest topics in online poker these days are which sites have Macintosh software and which sites are still open to US players. The folks at Compatible Poker have organized the answers to both those questions in a way they hope will make them a ton of money in affiliate revenues, and frankly I think they will succeed if they are smart enough to realize, like most smart advertisers, that Lion Tales readers are the pathway to success for them. Anyway, the Mac Poker page on Compatible Poker has a nice list of sites people can play on if they use a Macintosh, and the US accepted poker site page tracks which sites remain open to US players so that if your favorite site shut its doors you’ll have somewhere to shuffle up and deal. Another option would be to move to Canada, although it looks as if they may be moving toward poker prohibition themselves. And Mac users will definitely want to check out the list of compatible sites. In fact, even if you have a PC you should check out the list of Mac sites; remember, your opponents there will be people who have not figured out in 22 years that Microsoft technology is superior in every way.

I’ll leave you with proof that I am in fact the world’s leading authority on dining in Las Vegas. Bon appétit!

Posted by Richard Brodie at 7:50 PM