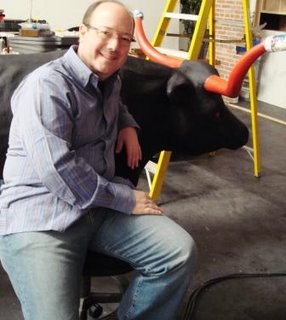 I’ve been a Penn & Teller fan as long as I can remember. I’ve seen their show a dozen times, bought their books, shook hands with them after the show, and recently become friends with Penn (the big one who talks) and his beautiful wife Emily. I watched the first season of Bullshit on Showtime religiously (which may not be the best word to describe the work of a rabid atheist) until I canceled my Showtime subscription because that was the only thing I was watching on it. So when Emily invited me to go to the set where they were taping season five, I jumped at the chance.

Bullshit is taped in , in a modest studio located just off the Strip in a small industrial park. 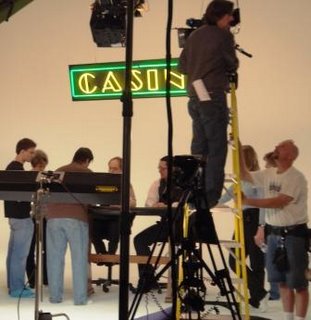 I knew I was in the right place when I saw Penn’s fuschia Mini-Cooper (one of three) with license plate “ATHEIST.” There was a gold Lexus SUV with license plate “MOFO” that clearly also belonged to someone with the show (Mofo the gorilla appears in their stage act). Emily pulled up and escorted me in.

I had wondered how they created their signature white-background effect on the show and discovered the straightforward answer: the set had a white background. This caused dirt problems (Penn said never again would he do a show with a white set) and Penn had a pair of magnetic metal over-soles he snapped on to keep his shoes clean while he walked around the rest of the studio. Teller covered a beautiful pair of burgundy Oxfords with more pedestrian surgical booties.

The stars of the show made efficient use of their time, sitting side by side working on laptops during the numerous breaks for scene changes. When we broke for lunch Penn and I discussed movies while he ate a huge plate of rice and vegetables. He was a big fan of ‘60s horror movies which, he said, were the only way for directors to make films with serious social commentary. “A horror film with breasts was an automatic green light,” he said. Lots of guys who wanted to make socially relevant films but had no particular interest in horror discovered that if they wanted to make a movie about, say, feminism, all they had to do was work it into a horror movie with boobs and they got an automatic check.” I was going to have to watch all George Romero’s movies again from that perspective. 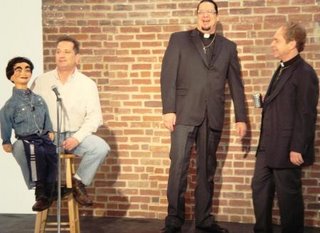 As lunch was about over Penn’s friend Otto, of the ventriloquist act Otto and George, arrived to do a bit in the show they were taping in the afternoon. Penn & Teller were calling bullshit on the practice of exorcism, dressed as priests and casting evil spirits out of George the dummy. I stayed to see Otto and George do their bit before excusing myself to go think about making horror movies with boobs.

Posted by Richard Brodie at 5:52 PM

David Cronenberg echoes Penn's sentiments regarding social commentary in horror movies. In his commentary for "Rabid", he says it was de rigeur for Canadian "exploitation" films like his to contain political dogma -- especially leftist.

You can go back and see Romero's films if you want, but only one of his horror films was from the 60's, 1968's "Night of the Living Dead". The rest were in the 70's and 80's, as were most of Mr. Cronenberg's macabre masterpieces.

Wow you are so lucky!
This show + Penn Radio changed
me from a bible beating moron into
a rational Atheist.