They say you can tell a Chinese restaurant is good if there are Chinese people eating there. Me, I thought the Michelin star hanging on the wall at Wing Lei was a better clue.


I was entered in the million-dollar Baccarat tournament at the Wynn and I had made it to day two along with a few dozen others, one of whom was right ahead of us getting seated. I caught the eyes of Diane, my girlfriend, and Noreene, her BFF. I don’t like to talk about race but they were the kind of girls you didn’t have to ask if they liked Chinese food before you made the reservation. Bruce, our friend from tha OC who flies his own plane, was with us as well.


“You see that guy?” I whispered. They looked at his back. “That’s Johnny Chan,” I said. “Johnny Fucking Chan.”


“Have you played with him?” asked Bruce.


“Yup,” I said. He knocked me out of a big tournament when his Kings beat my Jacks. Johnny Fucking Chan.”


“Doctor!” said Bruce.
“Why do they call him that?” asked Diane. 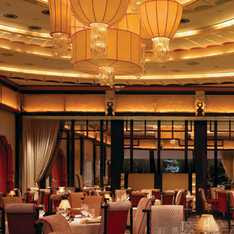 “Oh, they don’t really. It’s from a movie,” I said. “Rounders. He was in it. He won the World Series two years in a row.” Back to back baby, and the second win, against Erik “Stretch” Seidel, who will forever regret his decision to wear that funny orange visor, was immortalized in the movie. No one will ever do that again. Not even Jamie Gold.
Me, I never had much luck in poker tournaments. Baccarat was more my game. I had made the final table at the Wynn baccarat tournament back to back the last two times but had come up short: the first time I was the first one out, making a move that failed. The second time I had a chance to win it all when I bet Banker and Tie on the last hand, but when Player drew a third card to make nine, my third card came up one short and I lost by a pip. 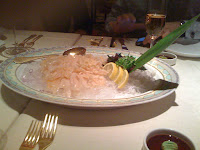 The hostess took us to the VIP table in the corner and I told the girls to order anything they wanted because I was RFB. Diane giggled and ordered a lychee martini. I ordered pink Champagne on ice and the geoduck two ways followed by the three-cup cod, probably the best Chinese dish I’ve ever had. “The geoduck is $138! Doctor!” said Bruce.
“It’s good to be RFB,” I said. Diane giggled.
Noreene had her camera out and was looking around the room. “You want a picture with Johnny?” I asked. She grinned and nodded. “Check out the private room,” I said. She and Diane hopped up and found Johnny in the private dining room. He posed for a photo and the girls had their celebrity fix for the evening. “He wanted us to pose in front of the dragon,” Noreene said, showing me the photo. 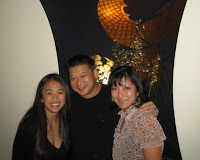 Diane said, “Johnny Fucking Chan.”
The next morning I once again made it to the semifinals and, with some luck, to the final table for the third time in a row. Diane had been sweating me. It was five o’clock but I held off on the martinis as I wanted my head clear for the final table. Diane wanted something sweet so I suggested cookies or candy from the minibar. “Those things scare me,” she said. “What if you get clumsy and knock all the stuff off? Do they charge you for everything?”


“Well, I suppose they might, but you could get it reversed. Besides, I’m RFB.” She giggled. Then she wrinkled her brow.


“What does RFB stand for again?” she asked.
“Complimentary Room, Food, and Beverage.”
“Oh!” she said. “I thought it stood for Richard Fucking Brodie!”
I took my seat at the final table and maneuvered my way into the lead going into the final hand. When the bets were revealed, I saw that once again, I needed Banker or Tie to win it all. The player’s cards were faced: a natural nine. I squeezed and bent the banker’s cards for all they were worth.
Eight.

I lost again.
I ordered that martini.

After all, I was RFB. 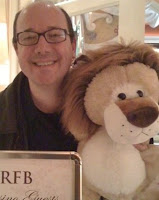 Posted by Richard Brodie at 5:20 PM

I'm trying real hard not to make the obvious joke.

One of my history professors told us that history is written by RWBs and to some affect by RWGs, RFB is just too easy. +2

I've missed stories like this! I was very happy to hear you had a new post up, and it didn't disappoint.

i thought it was rich fucking bastard... :)

Funny, I just picked up a book at Borders yesterday called Virus of the Mind. Turns out that it was a book on memetics written by a Full Tilt Red Pro- I had to buy it! Oh wait a minute- it was written by a writer who just happens to be a Full Tilt Pro!

Shit my buddy and I have been using the phrase 'Who do you think you are? Richard Fucking Brodie?' for ages now ever since the '06 WSOP when you were on tv. It's good to know that it's starting to catch on. Your name will live in infamy in our tiny little world 8-)

David Robinson said...
This comment has been removed by a blog administrator.
2:33 PM