Fall of the Roman Empire

In an overreaction of thermonuclear proportions to my recent good luck, Harrah’s has barred me from playing in the World Series of Poker, and in fact from even setting foot in any of their hotels. 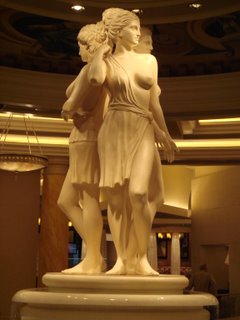 When Harrah’s Entertainment bought , many industry pundits predicted they would have trouble managing the high-roller business. Harrah’s was built on the high-margin, low-volume player. They produce a predictable win, cost little in comps, and there are many, many of them. High rollers demand games with a slim house advantage, generous comps, and the possibility of actually walking away with a win once in a while.

For 40 years, had a reputation for welcoming big action. At one point they were the biggest place in town. They loved big players and didn’t sweat if somebody won. They wanted to keep him coming back. Eventually the house edge would kick in, but for now they’d let the player enjoy his good fortune.

That reputation is gone.

On May 10, Harrah’s sent certified letters to several high rollers informing them that their business was no longer wanted at or any of the other Harrah’s properties in , , and . I was one of them. I called the office of Tom Jenkins, regional vice president, and got a call back from Terry Byrnes, the VP of customer service. He told me I was being 86ed because they couldn't figure out how to make a profit off me.

Now understand, the only games I play are poker and video poker. In poker, the house makes a 100% guaranteed profit straight off the top. In video poker, the house controls every aspect of the game: the paytables, the amount of the house edge, and the promotions and incentives they offer. There is no way to use skill – or even cheat – to beat video poker. You can’t count cards. You can’t peek at the dealer’s hole card. It’s a machine. The best you could possibly hope for is to play computer-perfect, which I don’t, and even if that were possible the machine still has a maximum theoretical payout chosen by the casino. The only thing the casino can’t control is luck. One reason I like video poker is because you can get lucky and win. You hit a royal flush every 40,000 hands or so. If you’re lucky enough to hit two, you’re ahead! If you hit three, you’re ahead for a long time!

Boy, have I been lucky at Harrah’s.

I hit four huge royal flushes in the last year at three of the Las Vegas Harrah’s properties. Not surprisingly, I’m ahead, although I’ve put 80% of it back. This seems to rub them the wrong way. But I have trouble imagining the thought process that would cause someone to decide that kicking out one of your most loyal customers is an appropriate solution to the problem of him having extremely good luck. If they think the machines are too loose, make them tighter. If they think they are giving me too much in comps, give less. They control every aspect of the game. Except luck. And kicking out players who have been lucky makes about as much sense as banning people from playing the lottery because they win it.

Reactions to lucky streaks in video poker are not unique to Harrah's, but the usual response is to cut down on the promotional offers to players who aren't losing as much as they hoped. Even that is potentially unsound business: lucky players get unlucky and you want them to be at your place when that happens.

If it weren’t for the WSOP, I’d laugh about this rather than cry. I don’t think they’re trying to punish me, I just think they don’t understand their business and are compounding one costly mistake – offering way too much in comps and incentives to video-poker players – with another. My friends, if you can’t figure out how to make money from people who only play games with a built-in house edge, you may as well give up on the casino business and close your doors.

In the meantime, know that the winner of the main event this year cannot be considered a true world champion.

Not when the Quiet Lion isn’t allowed to play.